Winner to be named on December 6

FAYETTEVILLE, Ark., Nov. 16, 2021 – The three finalists for the 12th annual Burlsworth Trophy have been selected and include Troy University Linebacker Carlton Martial, University of Arkansas Linebacker Grant Morgan and University of Georgia Quarterback Stetson Bennett. A total of 89 universities from across the nation nominated a player for the 2021 award. Last week the list was narrowed to 10 semi-finalists. The Burlsworth Trophy is awarded to the most outstanding college football player in America who began his career as a walk on. Burlsworth’s life is also the subject of a major motion picture, “GREATER”, which was released nationally in 2016.

Finalists will be honored and the winner of the 2021 Burlsworth Trophy will be announced on December 6th at 7:00pm CST at Crystal Bridges Museum in Bentonville, Arkansas. 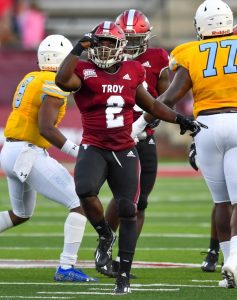 It didn’t take Carlton long to make an impact at Troy. After redshirting in 2017, he was awarded a scholarship before fall camp began in 2018. He started nine games at middle linebacker and was a top Sun Belt Conference Freshman of the Year candidate in 2018. He led all SBC freshmen in tackles, tackles for loss and was second in sacks. He was No. 6 nationally among freshmen in tackles. Carlton returned to his hometown of Mobile, Ala., for the Dollar General Bowl and dominated with six tackles, two forced fumbles and a fumble recovery. He capped the season by being elected to three different Freshman All-American teams.

As a sophomore and junior, Carlton totaled more than 100 tackles each season and earned first-team All-Sun Belt Conference honors. He entered this season with 239 tackles since the start of the 2019 season, which is the most by any player in the country. In 2020, he was a Burlsworth Trophy semifinalist.

This season, he’s racked up a team-high 102 tackles (37 solos and 65 assists) with nine tackles for loss and a sack for the 5-5 Trojans. Carlton also has an interception and a forced fumble. 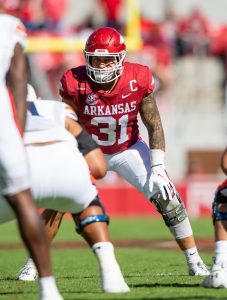 After having one of the better seasons by an Arkansas linebacker in recent history, Grant announced his return for one more season taking advantage of an extra year of eligibility granted due to the COVID-19 pandemic. In 2020, he joined Martrell Spaight (2014) as the only two Hog defenders in the past 10 seasons to be selected to the AP and coaches’ All-SEC teams in the same season. He started nine games at linebacker leading the team with 111 total tackles with 7.5 for loss, 2 sacks, an intercepted pass, five pass breakups and a quarterback hurry.

This season, Grant, who is on the Chuck Bednarik Award watch list and a Campbell Trophy finalist, is third on the team with 78 tackles and has 7 tackles for loss, five pass breakups, three quarterback hurries and an interception for the 7-3 Hogs. Morgan, whose older brother Drew played wide receiver for the Hogs, began his first three years on The Hill playing in every game.

Grant also excels in the classroom earning a degree in Kinesiology in 2019 and a masters in Operations management in 2020. 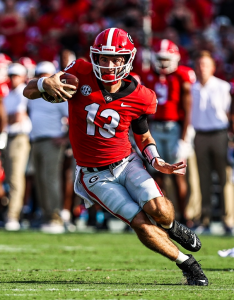 The Blackshear, Ga., native, is enjoying a career senior season and has helped Georgia to a 10-0 record and the top spot in the College Football Playoff rankings.

Stetson has started seven of the nine games he’s appeared in, including the past six. He ranks third nationally in passing efficiency (184.6) and fourth in yards per completion (16.75), leading the SEC in both categories.

He’s played every offensive snap in five of the past six games where he was 62-of-100 passing for 927 yards and 7 touchdowns. For the season, he’s totaled 1,625 yards passing with 15 TDs. He’s also Georgia’s fourth-leading rusher with 233 yards with runs of 30 and 20 yards.

He passed for 231 yards and two touchdowns in the Bulldogs’ win at No. 18 Auburn while rushing for 41 yards. He completed 10-of-12 passes for 288 yards and a school record-tying five touchdowns in a win over UAB.

Stetson began his Georgia career in 2017 as a redshirt freshman before transferring to Jones (Miss.) Junior College. After a standout season there, he returned to Georgia where he saw action in five of 14 games, completing 20 of 27 pass attempts in 2019.

The trophy is named in honor of Brandon Burlsworth. Without one D1 scholarship offer, Brandon walked on to the Razorback team in 1994, worked his way to being a three-year starter and was eventually named an All-American in 1998. Burlsworth was selected as the 63rd overall pick by the Indianapolis Colts in the 1999 NFL draft, but was tragically killed in a car accident 11 days later. The Burlsworth Foundation was created in his memory and supports the physical and spiritual needs of children, in particular those children who have limited opportunities. For a full narrative of the Foundation’s work, visit brandonburlsworth.org.

The Burlsworth Trophy is a member of the National College Football Awards Association (NCFAA), which encompasses the most prestigious awards in college football. Founded in 1997, the NCFAA and its 25 awards now boast over 800 recipients, dating to 1935. Visit ncfaa.org and @NCFAA on Twitter to learn more about the association.