Winner to be named on January 4

FAYETTEVILLE, Ark., Dec. 22, 2020 – The three finalists for the 11th annual Burlsworth Trophy have been selected and include BYU Wide Receiver Dax Milne, University of Arkansas Linebacker Grant Morgan and University of Pittsburgh Center Jimmy Morrissey. A total of 67 universities from across the nation nominated a player for the 2020 award. Last week the list was narrowed to 10 semi-finalists. The Burlsworth Trophy is awarded to the most outstanding college football player in America who began his career as a walk on. Burlsworth’s life is also the subject of a major motion picture, “GREATER”, which was released nationally in 2016.

The 3 finalists will be honored and the winner of the 2020 Burlsworth Trophy will be announced, virtually this year, on January 4th, beginning at noon CST. 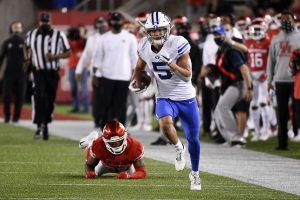 Dax Milne, Brigham Young University, Wide Receiver, JR —- As a Sophomore in 2019, Dax played in all 13 games as a reserve behind three seniors but still managed to post 21 receptions for 285 yards and 2 TD’s. Additional highlights that season included a punt return for 31 yards against Idaho State and scoring a touchdown against both USC and the University of South Florida. In 2020, he is now a full-time starter and on the Biletnikoff Award Watch List. His impressive year ranks him 5th in the nation with 1,118 receiving yards. He leads the BYU Cougars in receiving and also ranks 13th nationally with 8 TDs. He has six 100-yard games this season, averaging 17.75 yards per catch and 101.6 yards per game. Dax posted a career high in a win against Houston with 184 yards and 3 TD’s. Amazingly, his lone scholarship offer out of high school was from FCS school Weber State. 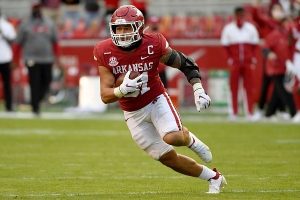 Grant Morgan, University of Arkansas, Linebacker, SR —- Grant played in every game his first 3 seasons amassing 101 total tackles, 39 solo, 9 TFL’s, 4 QB hurries, a forced fumble, and a sack; but his Senior season has truly been special. This year, he leads the SEC and ranks 2nd in the nation in tackles per game (12.3). His 71 assisted and 111 total tackles rank him #1 and #2 respectively in the FBS. The true apex of his 2020 campaign was a 19 tackle, 6.5 TFL, 2 sack, 2 pass break up, and a pick 6 performance against Ole Miss. The 19 tackles is tied for 4th most tackles in a single game this season, and this performance earned him Co-SEC defensive player of the week, Bronko Nagurski National Player of the Week, and Bednarik Player of the Week awards. Grant is also an excellent student and has applied to medical school. 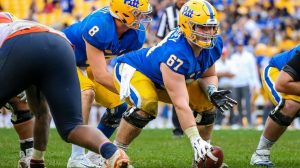 Jimmy Morrissey, University of Pittsburgh, Center, SR —- After redshirting his freshman year in 2016, the following year Jimmy won a hotly contested battle with several scholarship players and began an incredible career where he was the Panthers’ starting center for 4 consecutive seasons. An All-ACC selection in only his second year, Jimmy was the first center in Pitt’s history to earn that distinction. In his junior year, he established himself as “the” top center in the ACC, while not surrendering a single sack the entire season. Before the 2020 season, he was selected team captain for the 2nd consecutive year as well as being named Phil Steele Preseason All-American. Jimmy is enrolled in Pitt’s graduate school of business and is also a semifinalist for the National Football Foundation William V. Campbell Trophy which is given to the nation’s top football scholar athlete. Morrissey is considered one of the top center prospects in the 2021 NFL Draft.