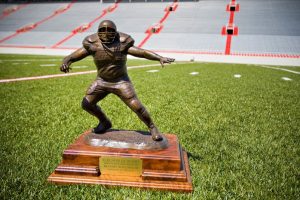 FAYETTEVILLE, Ark., Dec. 15, 2020 – Today, the Burlsworth Trophy selection committee announces the top 10 semi-finalists for the 2020 award. The Burlsworth Trophy is awarded to the most outstanding football player in America who began his career as a walk-on. Brandon Burlsworth’s life is also the subject of a major motion picture, “GREATER”, which was released nationally in 2016.

The 2019 winner was defensive end Kenny Willekes from Michigan State University. After receiving no division one scholarship offers, Willekes walked-on at Michigan State, where he became an All-American, the Big 10 Defensive Lineman of the Year, and Michigan State’s all-time leader in tackles for loss (51). He was drafted by the Minnesota Vikings in the 2020 NFL draft. The 2018 winner was Hunter Renfrow, who won two national championships with the Clemson Tigers. Drafted by the Las Vegas Raiders in 2019, he is currently averaging 45.7 yards per game receiving and 10.4 yards per punt return in the 2020 season.

The 2020 Burlsworth Trophy semi-finalists include:

Grant Morgan, University of Arkansas, Linebacker, SR —- Grant played in every game his first 3 seasons, amassing 101 total tackles, 39 solo, 9 TFL’s, 4 QB hurries, a forced fumble, and a sack, but his Senior season has truly been special. This year, he leads the SEC and ranks 2nd in the nation in tackles per game (12.3). His 71 assisted and 111 total tackles rank him #1 and #2 respectively in the FBS, and his 19 tackles against Ole Miss are tied for 4th most tackles in a single game this season.

Dax Milne, Brigham Young University, Wide Receiver, JR —- As a Sophomore in 2019, Dax played in all 13 games as a reserve behind three seniors, but still managed to post 21 receptions for 285 yards and 2 TD’s. In 2020, he is now a full-time starter and on the Biletnikoff Award Watch List. His impressive year ranks him 5th in the nation with 1099 receiving yards. He leads the BYU Cougars in receiving and also ranks 12th nationally with 8 TDs. He has six 100-yard games this season, averaging 17.75 yards per catch and 101.6 yards per game.

Will Spiers, Clemson University, Punter, SR —- Will Spiers has had an amazing career. He has not only been a four-year starter, but an important member of the team who won the 2018 National Championship. During his Junior year, he finished with a career-high 41.7-yard net average which is the 2nd best single-season mark in school history. Will has been especially effective at pinning the opposition inside of their own 20 yard line, making him a mainstay on the ACC team of the week. Spiers will finish his career with the school record for career starts by a punter.

Sammy Thompson, Coastal Carolina University, Center, SR —- Sammy started 10 contests in 2019, lining up at center for a CCU offense that recorded over 400 yards in 5 different games. Behind the offensive line unit, the Chants were an incredible 23-for-29 on 4th down attempts.  Thompson also graded out at 90 percent or higher in 8 games during that year. In 2020, Sammy has started every game for the undefeated and nationally ranked Chants. He is a leader on the offensive line that has helped Coastal Carolina to the #1 scoring offense in the Sun Belt Conference.

Keith Duncan, University of Iowa, Kicker, SR —- Duncan burst onto the football landscape as a Freshman connecting on 38-39 PAT’s and 9-11 FG’s. In 2019, he was a Consensus All-American, named Kicker of the Year in the Big Ten, as well as 1 of 3 finalists for the Lou Groza Award. He converted 29-34 field goal attempts and all 32 PAT attempts, while establishing a school record for single-season FG’s. This season he is again on the Lou Groza Award Preseason Watch List, a preseason 1st-team All-American, and a preseason 1st-team All-Big Ten selection.

Calvin Austin III, University of Memphis, Wide Receiver, JR —- After playing sparingly as a freshman, Calvin appeared in 13 games the following season, finishing with 17 catches, 315 yards, and 3 TD’s. He holds the U of M record of 5 consecutive games with more than 100 receiving yards. This year, he has been the Tigers’ top offensive playmaker and has been especially effective in key moments with 2 game-winning TD’s in close, 1 point victories. Austin III has also emerged as one of the top wide receivers in all of college football, ranking 5th in the nation in TD’s and 9th in receiving yards.

Chris Bergin, Northwestern University, Linebacker, SR —- Playing primarily on special teams during his freshman year, Chris was one of only 13 first-year players to see action for NU. Over the next two years, he cemented himself as an every-game player and eventually a starter making 137 tackles and 9.0 TFL’s. In seven contests this year, Bergin has 3 games with double digit tackles and ranks 8th in the Big Ten in tackles per game.

Ry Schneider, Oklahoma State University, Center, SR —- After only seeing spot duty his Freshman and Sophomore years, Ry became an important member of the offensive line in 2019. He helped the Cowboys’ successful offense average 229.6 rushing yards per game. In 2020, he has started every game at center for the Cowboys.  He is a key Senior leader on the offense that has paved the way for 4 different OSU running backs to have 100-yard rushing games this season.

Jimmy Morrissey, University of Pittsburgh, Center, SR —- After initially redshirting in 2016, Jimmy began an incredible career where he was the Panthers’ starting center for 4 seasons. In 2019, he established himself as “the” top center in the ACC, while not surrendering a sack the entire season and being named a 1st team All-ACC selection. The 2020 season he was selected team captain for the 2nd consecutive year as well as being named Phil Steele Preseason All-American. Morrissey is considered one of the top center prospects in the 2021 NFL Draft.

Carlton Martial, Troy University, Linebacker, JR —- Carlton was an immediate impact player earning Freshman All-American honors in 2018. As a sophomore, he became the 1st underclassman in 20 years to finish a season with 100 tackles, 15 TFL’s, and 3 INT’s. He was also named All-Sun Belt 1st Team and closed that year with 126 tackles. Martial, a 2020 Walter Camp Preseason First Team All-American, is not only ranked 1st in the nation in tackles but also leads the FBS with 21 tackles in a single game.

The selection committee will announce the top three Burlsworth Trophy finalists on December 22nd. Finalists will be honored and the winner of the 2020 Burlsworth Trophy will be announced on January 4th, at a virtual ceremony.